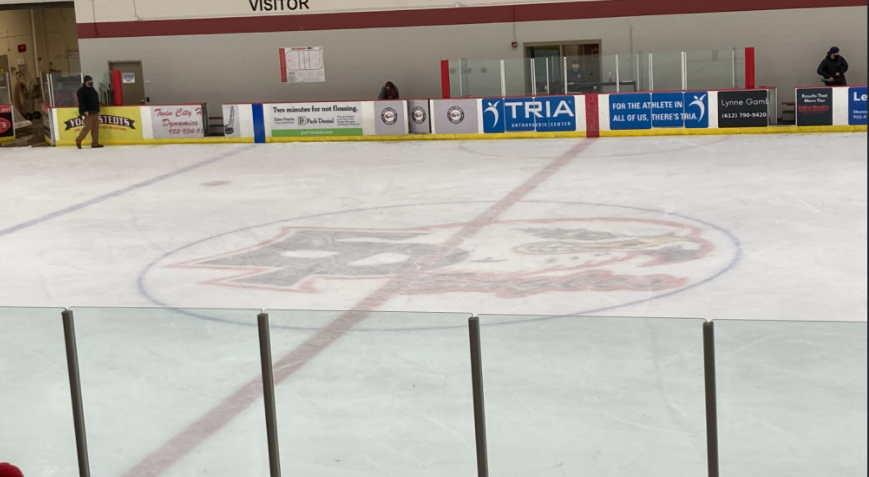 Eden Prairie is led by Jackson Blake and Carter Batchelder. Both players combined for 53 points on the season. The Eagles finished in second place last year at the state tournament after losing to Hill-Murray in the championship game. They are fully capable of going back this year, but taking home the championship this time around.

Benilde St. Margrets is led by Adam Marshall, who has 12 goals and 10 assists this year for 22 points on the season. The Red Knights lost to the eventual third place finishing Blake Bears in a heartbreaking overtime section championship game at Mariucci last February. I was there for that and recorded the video of the game winning goal, and that was taken from me and went viral, no big deal though:). BSM is a quick team, but doesnt have as much depth down the line in their bottom 6, which you will see come playoff time.

The game started and you could see the level of physicality both teams were committed to playing at tonight. Benilde was gifted with an early power play but couldn’t capitalize.

Eagles goaltender Zach Hayes was a puzzle the Red Knights couldn’t solve tonight. Shortly after their own power play, the Red Knights find themselves on the penalty kill. Eagles senior defenseman Luke Mittelstadt scores on the power play though off of a great cross crease feed to make it 1-0.

After a scramble later in the first.. EP goalie Zach Hayes makes a big save and 16 seconds later, 200 feet away, Carter Batchelder makes it 2-0 for EP during a big battle at the net. Carson Limesand makes a big save moments later on another Eagle scoring chance.

With about 15 seconds remaining in the first period, Jackson Blake takes the puck into the offensive zone shorthanded and awkwardly falls into the boards. Blake was visibly in pain, the hit seemed legal to me, and the BSM fan section.. But the EP head coach made his words on the hit heard throughout the entire arena.

Eden Prairie starts the second period on a power play, which I can only assume was for the hit on Jackson Blake. If that is correct, it wins the latest penalty called award. EP and BSM shared quality chances at the start of the period and it did not seem like a 2-0 game, very even. EP goes to the PP(I had to make that rhyme at least once) and has many chances but Limesand was playing strong after surrendering 2 goals in the first.

Benilde gained a bunch of momentum after a good set of saves by Carson Limesand, but that momentum was killed when Eagle forward Jackson Blake returned to the bench after everyone thought he would be out for the game.

BSM has the puck in their defensive zone and gives away an ugly turnover. Carter Batchelder takes advantage and goes between the legs of Limesand to make it 3-0 in favor of Eden Prairie.

Teams should be worried though when they have a 3-0 lead and I am in attendance, teams tend to lose that lead fast..cough cough St. Thomas Academy.

After 2 periods of play it was 3-0 EP, and they are running away with the game.

Benilde opened the period with a great chance, but Hayes comes up big again, like he did many times tonight. The Red Knights had regained all the momentum and had many chances but just could not find the twine tonight. It got to a point where no matter what BSM did, they could not score. Not surprising though the way Zach Hayes played tonight.

Eden Prairie looked unstoppable, but so has Lakeville South and Maple Grove, I am super excited for this year’s tournament.

If you were to watch this game without a scoreboard or shot counter, you would have thought Benilde was absolutely destroying Eden Prairie in this game. I don’t know many other ways I can say Zach Hayes played outstanding.

BSM goes to the power play with 2 ish minutes remaining, last chance to solve the Hayes puzzle, they succeed. Adam Marshall rips a one timer over the left shoulder of Zach Hayes to make it 3-1.

9 seconds later the Eagles are on a fastbreak and Riku Brown shoots while sliding. He slides into the net and dislodges it, at the same time the puck crossed the red line. All 3 refs waived the goal off, but after ¨video review¨ or crowd complaining, same thing, the refs awarded the goal to the Eagles to make it 4-1 and give Riku Brown his 4th goal of the year.

The final score is 4-1 for an Eagle win

The Eagles take the ice again this Saturday at 7pm in Edina versus the Hornets.

The 10-1 Red Knights squared off against the 5-6-1 Edina Hornets. BSM started the game with former Edina skater Jackson Bisson scoring at 4:36 mark

Rochester Mayo Comes From Behind to Beat Dodge County, 4-3 All good things must

Boys All Metro Player of the Year