Menu
📲 GET THE APP 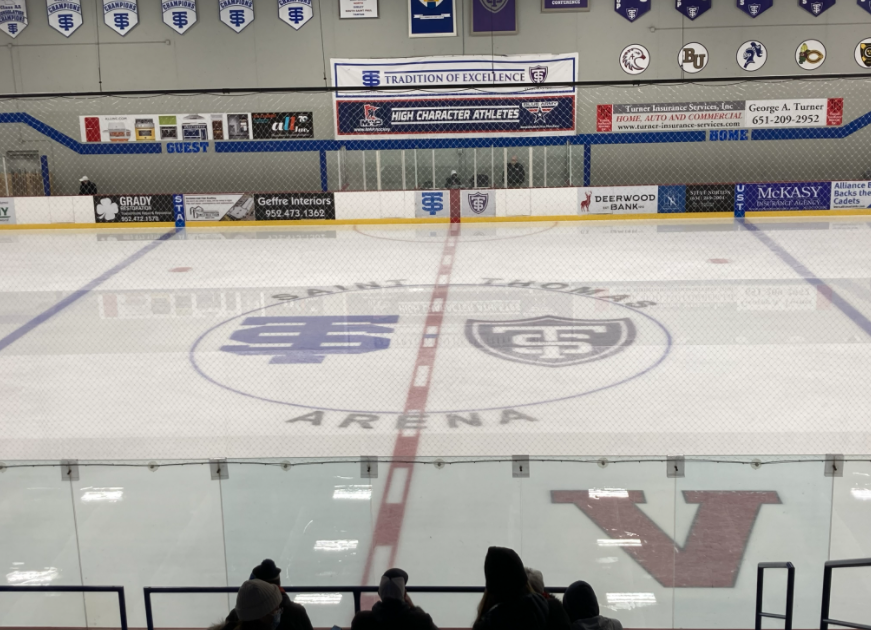 The St. Thomas Academy Cadets are a powerful team, once again. They are looking to return to the Xcel Energy Center this spring after a 3-2 loss in the semi-finals to Hill-Murray, the eventual State Champion. And then losing in the third place game 4-0 to Blake. Led by Michigan commit and Eagan native, Jackson Hallum, the 7-1-1 Cadets have a good chance in a weak section to make it back to the X for redemption this spring.

The Holy Family Fire are 5-2-1 now with a decent remaining schedule. Last season the Fire were eliminated by the Chaska Hawks in a 6-3 loss in the quarterfinals of the 2AA section. It is going to be tough for the Fire to get to the X this spring with Eden Prairie in their section, but you never, ever, know. This year’s Fire squad(as I like to call them) is a much better team than last year though, and can steal games from good teams, like they almost did today.

The first couple of minutes of the game, you could tell the teams were evenly matched up. St. Thomas though, scored about 6 minutes into the game. It was senior forward Tommy Deverell who grabbed a free puck and buried it in the back of the net for a 1-0 lead. After that goal it was all St. Thomas Academy.

Fire goalie Jack Olson made a big save, but that was followed up with a Holy Family penalty, resulting in another goal scored for STA, this time scored by Tanner Brouwer. And just about 2 minutes later, Jackson Hallum sends linemate Jared Wright in on the breakaway, and he makes it 3-0.

Fire senior Jack Olson stopped 10 of 13 shots in the first period and Carsten Lardy of STA stopped 6 of 6 shots, and with that St. Thomas led 3-0 after the first period.

The second period appeared as if nothing had changed from the first. STA almost scores 6 seconds in, but the post bails out Holy Family. You could see the momentum change after 3 straight fastbreaks for the Fire, it gave them a little life being down 3-0 and all. Holy Family hits the post on a 2 on 1 and just about a minute later, they got another chance at the 2 on 1 and senior forward Grant Limke snipes it past Carsten Lardy to make it 3-1.

Moments later, the star Jackson Hallum gets a breakaway chance and Fire goalie Jack Olson makes an amazing short side save… and that is when the game completely flipped. At the time of that stop the shots were 20-11 in favor of St. Thomas. The final shot count was 35-33 in favor of Holy Family, just to show the difference. The Fire had momentum but STA netminder Carsten Lardy played phenomenal today and stopped a lot of great scoring chances.

Holy Family came out with speed in the third, you could tell they wanted the comeback. With that speed though, STA had a hard time slowing them down and sadly this resulted in a 5 minute major call against the Cadets, as we hope Spencer Lewin of HF is okay. The first 3 minutes of the major didn’t result in many chances for the Holy Family Fire. Another penalty though set the Fire up with a 2 minute 5 on 3 chance, and they took full advantage of it. Luke Roelofs roofs it over Lardys shoulder to make it 3-2.

Holy Family though gets their first penalty of the game shortly after the big goal and we had the chance to see the interesting power play unit for STA. They played 5 forwards with their two stars, Hallum and Wright playing as defensemen. STA does not convert though.

Holy Family gets another power play chance, and Charlie Lindberg rips it home to make it 3-3. And I bet you could guess what happens next, another penalty. I think there was about 14:00 total of power play time between both teams in the third, after a fairly clean first and second period too. STA does not mark up on the power play though as it stays 3-3.

Both teams are very fast and have the talent to represent their respective sections in the state tournament this spring after what I saw today, and wonderful goalies on each side as well. With 1.1 seconds remaining, St. Thomas Academy gets called for ANOTHER 5 minute major. Regulation ends and we head to overtime tied at 3 goals a piece.

Not much happened in overtime, Holy Family couldn’t get the winner despite spending half of the extra frame on the power play. And this game ends in a 3-3 tie. St. Thomas is kicking themselves knowing they could be 8-1-0 right now, but sloppy penalties put the Fire right back in the game. As for Holy Family, they are happy to show what they can do down 3 goals against a top team in the state.

What brand of gear do the Pro’s wear?

Ever wonder what kind of hockey gear the NHL players wear?  Well we have some answers for you.  According to geargeek.com the MN Wild players